I will admit right now that I have very little fashion sense. I know names like Vera Wang, Vivian Westwood, and all of them but I can’t really tell them apart much less name the pieces of clothing…I admit to being fashionably challenged, which can be problematic when writing. Thank the gods for Google…and Titanic!

I don’t remember how I came up with the time period for Eyubea Girls but I knew it had to be before the Titanic just because of the history of that event. Not to mention the fact that I had a feeling that the fashion would be similar considering that my story happened about four or five years before.

At least I had a reference point.

One of the first outfits I had to plan was her wedding dress. I knew it had to be something elegant and simple, considering who she would marry. I researched and found a dress that was beyond perfect. It’s the gorgeous simple lace gown that had a pinched waist. It spoke of money but it didn’t seem ostentatious with a veil and some extravagant train. This was a dress I think some would wear today! 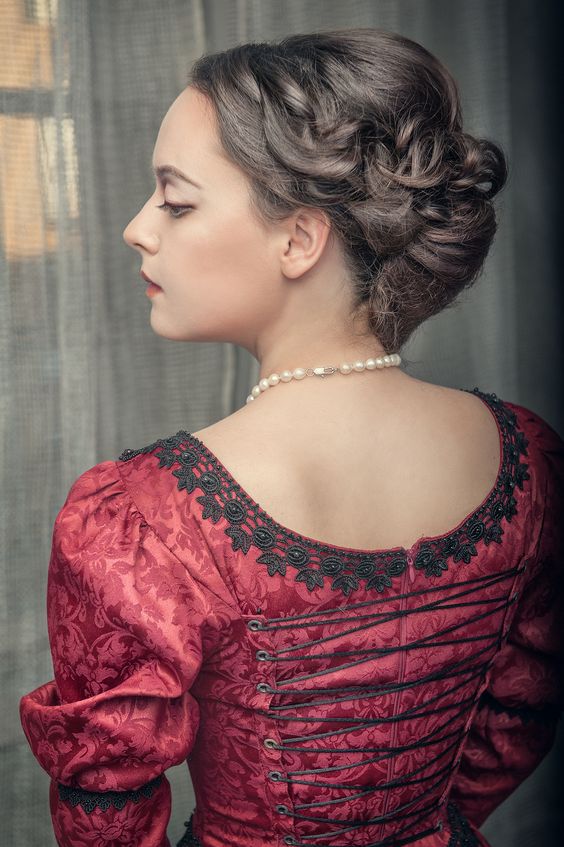 Now for Lisbette’s other dresses, I had a helluva time finding teasers that could speak to the time. Places like BigStockPhoto and Dreamstime didn’t have what I needed, at least at first glance and the period specific photo sites had poses and smiling…rarely do I have teasers of people smiling. So my cover designer, Jennifer Stevens worked with what was there and it came out beautifully. Funny enough, this dress, this picture, is supposedly for a story set a couple of centuries earlier. For this purpose, I took it because it was really how I pictured Lisbette looking as she became married woman in that time.

Then came the scene at the ship. I will admit to being inspired by that scene of Kate Winslet in Titanic in the big hat. I thought she looked gorgeous and wanted Lisbette to show that same sophistication for that scene. 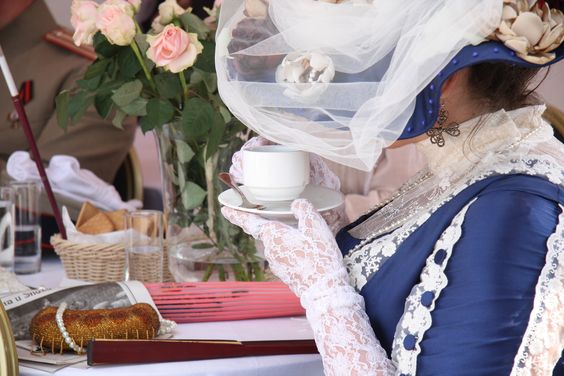 I lucked out and found the perfect teaser for that scene. On that type of ship, from what I’d read, the people were in full regalia. Of course, there were different decks. Lisbette and Graham were in the middle and she’s looking up at the golden columns and sheer luxury of the upper decks, reserved for the ridiculously rich but still this dress she had as a part of her wedding outfits had the perfect color and design for the time, just as she boarded the Gray Line to head to southern Africa.

Now on the ship she meets Bettina “Bett” Milbanc, who’s traveling alone. Bett is very much her own person. British mother, American father, who’s the editor of a major paper in London, she’s a young reporter herself travelling the world covering stories and writing about the silent wars being fought and the people in the crosshairs. Bett’s energy was daring and smart and a young woman who could hold a conversation with dignitaries, royalty as well as a couple of blokes in a casino with equal ease.

I found this fantastic sketch. The second I saw it, I knew it was Bett. I saw her being able to pull off the suit and tie outfit with ease. She was a woman who would dare to wear pants, which was unheard of back in those days. But there were women who did it, much to society’s chagrin. But she wouldn’t have cared. I guess in that way, she was ahead of her time, which was quintessentially Bett!

One of the most challenging tasks was finding pictures, teasers, of black women of the time. There are a good amount of modern images but even on the historical picture site, it was damn near impossible to find the kid of image I needed to represent Clare-Voy, caretaker, guardian, teacher, surrogate mother to Lisbette while she was in Eyubea. My begging and bitching paid off.

Clare-Voy is a woman who doesn’t look her age but she has definitely learned more than a few things about life in her time. I love this picture because she has the look I pictured Clare-Voy would when she beheld “the very bad man.” I love her outfit and as the historical pictures of African women are topless and in traditional wraps and robes, this ensemble was just a beautiful find.

Last, but not least, Graham Tate-Fuller. Graham is the kind of man who would look much like the men of the time but inside was a different story. I needed to see him wearing the standard fare and I was able to raid Google and Wikipedia to find something I could use to help me visualize him.

I found a couple of pictures that I used for Graham (right) as well as for Jeremy Cash. I do like the buttoned up look of the Graham-inspired picture because he would be that. He would look the part of the missionary, of the upstanding man who would unravel. And the picture I used to envision Jeremy looked a little less uptight. Jeremy was definitely more relaxed and authentic than Graham and this suit, with the lower collar and the tie, made me feel more relaxed about him.

Overall, I don’t think I could have ever expressed my gratitude to Google because writing a historical is definitely an experience and I needed all the help I could get to envision the clothing choices of the characters. I’m still no fashion maven, not even by a stretch but I can only hope that I didn’t show it too much in story.